Ardmore is delighted to report that at the end of 2017, 4 of our vessels (the Ardmore Seafox, Ardmore Sealion, Ardmore Seahawk, and Ardmore Seawolf) were awarded an “Environmental Achievement Award” by the Chamber of Shipping of America (CSA), in recognition of environmental excellence during two consecutive years of operation.

The vessels were put forward for the award by global energy and commodity trading company Vitol. To be eligible for the award, the vessels  had to demonstrate  at least a two-year period of the following:

Commenting on the awards, CSA said:

“The Environmental Achievement Awards are a great opportunity for owners and operators to recognize the accomplishments of their mariners and shore-side staff. While the public hears of instances when there are environmental problems, they should know that this industry has an excellent record of environmental accomplishment. The awards were initiated to let our seagoing and shore-side personnel know that we appreciate all they do as good stewards of our marine environment. The Board encourages all vessel owners and operators to nominate their compliant vessels for this award.”

We are extremely proud of this recognition as it underlines Ardmore’s high level of commitment to the protection of the marine environment in which we operate. Thank you to our seafarers for their continued support in upholding these standards. 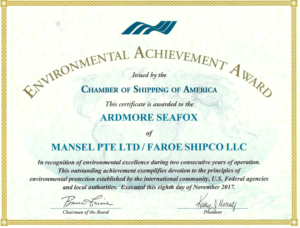 Disclaimer: This article was originally published in issue 15 of the Ardmore Standard. Not to be reproduced without permission from Ardmore Shipping.