In May, Ardmore Shipping and Anglo Ardmore Ship Management hosted their first Anglo Ardmore Crew Conference which took place in Mumbai, India. This provided a valuable opportunity for Ardmore staff and senior officers to congregate to gain new insights, ideas, and training. The theme for this year’s event was One Team, emphasising on building stronger relationships with each other.

The event which was held on 21st May brought together over 30 senior officers to meet with Ardmore and Anglo Ardmore’s shore-based staff, including Anthony Gurnee, Ardmore’s CEO, and Peter Helm, Managing Director, Anglo Ardmore. During the event participants exchanged ideas, improved their knowledge of the businesses, and built stronger relationships.

Celia Kang, Ardmore’s Marine Personnel Manager, commented: “This conference was an invaluable opportunity to share ideas and build stronger relationships between our sea staff and shore-based teams, in keeping with our spirit of ‘one team’. We kept the formal presentations to a minimum and put the focus on learning from each other and working together.”

Attendees also developed their skills with Skysails, Ardmore’s performance optimisation system used across its fleet. The training allowed sea staff to share their knowledge and experience using the system. Feedback was also shared with the trainers in order to improve the system, which ultimately enables standards to be enhanced in fuel and operational efficiency. 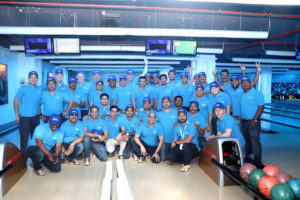