This week, Ardmore Shipping announced that Curtis McWilliams has been appointed as Chairman of the Board effective January 1, 2019, taking over from Reginald L. Jones who will be stepping down effective December 31, 2018.

Mr McWilliams became a director of Ardmore in January 2016. He has over 25 years of experience in public and private company governance and corporate finance, including as a transportation industry investment banker with Merrill Lynch & Co. for 13 years and CEO of NYSE-listed company Trustreet Properties Inc. He currently serves as Lead Director of Braemar Hotels and Resorts, Inc.

“I want to express my sincere appreciation to Regg for his service to Ardmore, in particular over the past year when he has stayed on to help complete the transition from Greenbriar sponsorship to Ardmore becoming one of the few truly independent and widely-held public shipping companies. We have benefitted greatly from Regg’s leadership and will miss him following our 2019 annual general meeting, but he will leave the Company in the very capable hands of Curtis McWilliams and our other board members who possess a broad range of relevant skills and experience and a singular desire to do right by our shareholders.”

“I am honoured to assume the role of Chairman and look forward to working even more closely with the Ardmore management team. With a leading fleet of modern, fuel-efficient MR tankers and excellent people both ashore and afloat, Ardmore is well positioned to thrive amid the opportunities that lie ahead.” 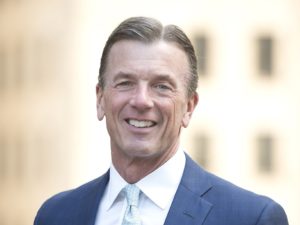