In our second in a series of Chief Engineer interviews, we caught up with  Mathew Kurian to discuss his motivations for becoming a seafarer as well as his experience of life onboard an Ardmore vessel.

Born in India, Mathew’s seafaring career began in 1998 when he joined Univan as a  Junior Engineer, working his way up to the position of Chief Engineer in 2011. He joined the Ardmore Seafarer in April 2015.

Why did you choose a career in seafaring?

Growing up, I knew nothing about what a career in shipping would entail. I had no benchmark of what the merits or demerits of being a seafarer were. But during my teenage years, I became obsessed with the white uniform that Naval officers wear, and, believe it or not, this became a strong motivator for me to join shipping.

What can you remember from your first trip as an engineering cadet?

After my training, like any other fresher, I was really excited to go onboard and prove my mettle. The first vessel assigned to me was a product tanker named “M.T Great Promise”, which I soon realised the majority of people referred to as the ‘M.T Great Problem’. Although this didn’t make much sense to me at the time, once on board, I finally got it! The vessel was one of the toughest in its fleet at that time and it made my initial experience of life onboard very challenging.

In hindsight, it also gave me the courage to face adverse conditions as I was able to attend a lot of break down maintenance, which was almost a daily occurrence. As luck would have it, I was fortunate enough to have very good senior officers who taught me how to judge and overcome tricky situations.

My first trip was a voyage from Singapore to Chennai (Madras at that time). Even though the voyage itself was short, the vessel was anchored in Chennai for 17 days, which was quite unexpected. At that time, no provision or fresh water barges were allowed to supply in Chennai outer anchorage. So I had the ‘privilege’ to experience first-hand the joys of food & fresh water rationing on board. Thinking about all those things now, it’s fair to say that all those experiences which I was able to overcome onboard the vessel provided me with a strong foundation for my career path.

Did you always work on tankers?

No, I have worked onboard two container vessels, two bulk carriers, and one general cargo  vessel.

Describe how your career progressed up to Chief Engineer.

How was your first trip as Chief Engineer?

My first trip as Chief Engineer was on a bulk carrier named “M.V Nord Peak”. Myself and the Master were the only two Indians onboard, with the remaining crew from the Philippines. Even though I had sailed with Filipinos before, I hadn’t yet had the opportunity to sail completely with a Filipino crew, so I was a little apprehensive initially. But as it turns out the fear was all in my head, I had a very good experience onboard the vessel and we all got on well as a team.

What has been the highlight of your career?

I was fortunate enough to be entrusted by Ardmore to oversee a yard delivery, which involved us taking over a vessel from another management to our management. I also cherish the memory of getting the opportunity to beach a vessel in Chittagong.

What has been your most memorable voyage?

My most memorable voyage to date was onboard a 1970-built general cargo vessel. It is the only vessel I’ve been on which was built before I was born, and where I have seen copper pipes used for seawater pipelines in the engine room. The vessel’s main engine was also the only engine I’ve ever worked on which had no exhaust valve, but had exhaust ports.

Once during a voyage between Durban and Bombay through the Arabian Sea, we faced very rough weather. During heavy rolling & continuous pitching, we could hear heavy sounds from the deck, which later turned out to be a few container lashing eyes that were cracked and hanging loose from the deck. It was a highly stressful and dangerous situation as we were all afraid that the containers might fall off due to the heavy state of the sea, but somehow by God’s grace the weather calmed down shortly afterwards. Shortly after 2am in the morning, we spread large tarpaulin sheets above the containers (as it was raining heavily) and welded back all the lashing eyes back onto hatch cover.

What is the biggest change you have seen on board since you first went to sea?

The biggest change I have seen on board is the increase in awareness of safety at sea, protection of the environment against pollution of the sea, an increase in paperwork and various inspections. Conversely, I have also seen a decrease in seamanship, in socialising among seafarers on board. It seems nowadays that everyone has their own personal entertainment system, and as a result, very few seafarers make the time to spend together. Port stay and shore leave have also decreased, and of course alcohol is no longer allowed on board.

Apart from family what do you miss the most when you are at sea?

I miss my friends and the time we spend doing group activities together. For instance,  we sometimes get involved in a bit of charity work – visiting old age homes and orphanages. During Christmas, we also do carol night rounds in these homes especially for old people and kids who are forced to stay in these homes for various reasons.

What is your favourite part of the world to sail in?

Wherever the sea is calm! But my favourite port has to be Cape town in South Africa. It’s a wonderful port to spend your time, and I have plans to have a small vacation with my family in Cape town in the not too distant future.

What has been your most difficult experience?

I think it would have to be my time onboard my second vessel as Chief Engineer. On a voyage through the North Atlantic Ocean from Europe to US, we faced very heavy weather which resulted in an oil spill from the bunker tank vent onto the deck. It happened during the night, and when the Chief Officer came on the bridge early in the morning, he noticed oil floating on the deck. The wind was so strong that the oil droplets sprayed onto our accommodation, making it completely black. Even though the actual amount of oil spilled from the tank wasn’t much, due to the continuous rain, the oil floating on water had spread all across the deck. We were approximately 15 hours from the US port at this point, and decided to report the incident to the US coastguard. As the weather subsided a bit, we started cleaning the deck. It was freezing cold with wind and showers but everyone onboard got stuck in to assist, and by the time we reached port, we had succeeded in making the vessel arrive in a presentable condition. After several hours of intensive questioning and verification of records by the P&I lawyer, the US Environmental protection team, and the US coastguard,  the vessel  was  given the all clear to proceed.

And before leaving the vessel, the coastguard said they appreciated the way the vessel staff handled the situation by not hiding any truth from them.

How do you see the future for seafaring engineers?

With advancement in technology in shipping and the present day electronic engines and automation in various machineries, engineers too need to be updated regularly. I see a very bright future for marine engineers who can tune themselves for the present day as well as future requirements.

How does sailing with Ardmore Shipping differ from other shipping companies?

In my view, Ardmore is a company that is heavily involved in crew selection itself and also puts a significant amount of effort into advancing crew welfare, like no other owner. It responds and appreciates even small positive efforts taken by the seafarer. The business class travel, safety champion initiative, the one team initiative, and even the Christmas gift hamper makes Ardmore shipping unique.

Share something interesting about yourself that we mightn’t know.

In my younger days, I was very interested in collecting postal stamps and currencies of different countries. Now, my son seems to have picked up the same hobby and so I still try and keep collecting these items from anywhere possible so as to motivate him. 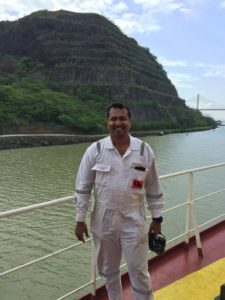 Disclaimer: This article was originally published in issue 16 of the Ardmore Standard. Not to be reproduced without permission from Ardmore Shipping.